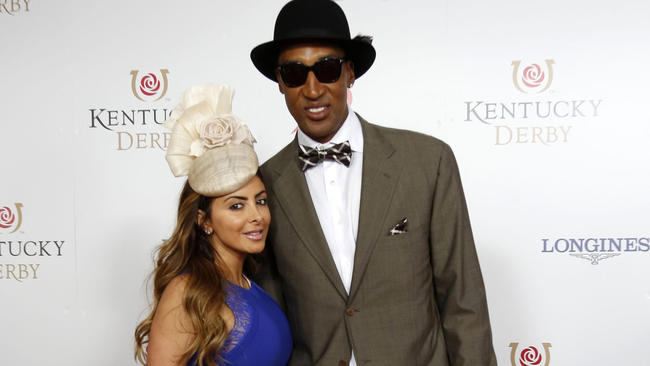 Divorce can get ugly. But it can become even more nasty when greed is involved. Former NBA superstar Scottie Pippen won 7 championship rings while playing alongside Michael Jordan on the basketball court. But now the basketball legend is seeking more victories on a different type of court–Broward County divorce court. After filing for full custody of his four children, Pippen has reportedly requested the court to avoid paying alimony to his wife Larsa by amending the couple’s prenuptial agreement. Although that is not likely to happen.  Despite being a multi-millionaire, Pippen insists he should not have to pay a dime to his soon-to-be ex-wife, according to a report by Radar Online. If Pippen gets what he wants, his wife could end up penniless and childless.

During their 19 years of marriage, the Pippens had a very stormy relationship. The marriage reached its boiling point when police were called twice in one month to the couple’s Broward County home for separate domestic disturbances.  A few days later, Scottie Pippen filed for divorce. According to the Radar Online report, sources claim Larsa Pippen was involved with rapper Future. In addition to requesting full custody, Scottie Pippen also wants to move his children, Scottie Jr, Justin, Preston and Sophia from Florida to Chicago. If the court denies Pippen’s request to move the children, he remains insistent on maintaining custody the majority of the time. Friends of the couple claim both parties remain friends. But when it comes divorce, jealousy and greed, friendship can quickly get thrown out the window.

The Pippen divorce is the latest high-profile case involving celebrities. More than $50 million of assets are at stake. There are several different factors that make the Pippen divorce stand out. But perhaps the most significant is Scottie Pippen’s request to avoid alimony. Spousal support is an important remedy designed to help a financially weaker spouse get back on their feet. Pippen must prove his wife is an unfit mother or is able to maintain her lavish lifestyle without any further financial assistance.

Alimony requirements are a state issue. To be awarded permanent alimony in the State of Florida, the parties must have been married for at least 19 years. Florida Statutes set forth a schedule relating the length of time of the marriage to the maximum number of years a needy spouse can receive alimony. However, in every case to receive an award of alimony, it must be proven that one spouse needs it and the other spouse has it.

Alimony issues are complicated and finding a family law attorney who can give you proper advice is critical. Over the years, Aventura alimony lawyer Stephanie G. Morrow has successfully represented countless clients throughout South Florida. Whether you are seeking to receive or pay alimony, it is important to have an experienced family law attorney to protect your interests. Do not try to resolve your divorce issues alone. Put yourself in the the best position to succeed. Contact the Law Offices of S.G. Morrow & Associates and schedule your consultation today.